WHY MONSTERHEARTS AND 3.X DND ARE EXACTLY THE SAME, AN ESSAY WITH AN INCENDIARY TITLE:

It’s no small secret I dislike the label OSR, and not just because of loud fascist shit-fucks. Old School Renaissance describes basically none of why I like those games. Simplicity, modularity, broad cross compatibility, none of that really sprung from the bloated minds of Gygax, et al.

In fact, I find Gygax to be a thoroughly mediocre game designer, but that’s not really the point of this.

(Also there’s I reason I turned comments off on this blog, and a big part of that is because I like writing vaguely B/Xish rpg content sometimes. That draws a shitty crowd. Full stop. Before somebody decides to tell me they’ve had a very different OSR experience, I don’t fucking care. People who shout “OSR!” the loudest [and lets be real Gary Gygax stans] tend to be right wing assholes of the worst types.)

Anyway, the thing I actually love most of all about OSRish games is that most every design choice grants primacy to the imagined physical space. Even the “rulings not rules” folkways of the scene support that. The freedom of action it gives you as a player, to know that you’re gonna get reasonable outcomes from manipulating the imagined environment. That’s the ticket.

(The creativity this encourages still astounds me; there was this dance battle with the orc tribes in the Caves of Chaos, and it was just sublime, omgolly. Fucking rad af. I get to be in that campaign tomorrow, yay! Long way from the caves though… well those caves.)

From my limited experience with story games, it seems like rather than physicality, specific narrative structures (often genre tropes) are granted primacy in all aspects of design. That’s not bad; I just don’t like it.

It kinda ties into how I don’t really like Monsterhearts (as a system)* for exactly the same reason I entirely dislike 3.x/Pathfinder. In both games, the only way to affect your roll is to know the system. System Mastery is the only Player Skill that’s rewarded. Meh…

I want to pretend to be a fuckup in an imagined space, thing that get in the way of this, I don't like.

So I’d much rather play Labyrinth Lord so I can be the smol, pink, and evil pegasus, that I need to be. 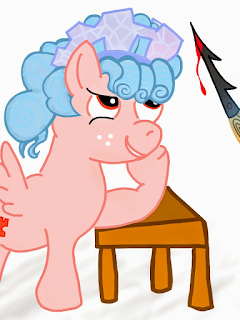 *I positively adore the particular campaign I’m in, and I do like the XP system. However, until I finally grokked the system well enough, I basically hated making a die roll. The way information is presented in that book is very difficult for me to parse, and parsing that system is super necessary.

In contrast, some of the best players I’ve played with got no fucking clue how Hit Dice or THAC0 or any that shit works. Yet, they can tell me their plan, and I can let them know what die to roll. Creative problem solving is the name of the game, and granted heavy bonuses by me and other (subjectively) good GMs.

Posted by Evey Lockhart at 7:15 PM