If I ever run mechs, (link) this is the system.
Fuck I like it so much. The ratio of abstraction to specificity is juuuust right. This is the setting:<[{Disclaimer - I've never watched any like mecha anime or shows or whatever. Though I played mechwarrior... 2 maybe, on my computer as a kid a bunch. Mostly just in the mission simulator in an expansion cuz you could be whatever mech you wanted.}]>GLITTER-BOTS: Melancholy and Explosions

Above, all is lost, eroded, photodegraded, destroyed. The raw grit, sand, and stones of continents bake beneath an unforgiving sun. Rivers and seas are choked in reflective microplastics. Most life on the planet gave up the ghost eons ago. Still though, some few specs of humanity cling to the baren surface.

Below, there still lie many, many, many technological artifacts from the Before. Above, there remains perpetual WAR!

Few things:
·So many of those artifacts are big fighting robots you ride inside.
·Melodramatic tendencies have been sexually selected for due to societal pressures, driven primarily by sexual selection. It's a feedback loop that's been going on for a long time, the beginning of which is unknowable.
·Literal glitter clogging the rivers.
·What does live is painfully dayglo, vibrant and strong.
·LISAFRANKLSDGLOWSTICKDEATHSOLILOQUYMISSILESRADIATIONBEAST
·All the player characters have a mech-fight-suit, robo-war-machine, or other big vehicle.
·Most villages are arranged fort-like, and 4-10 big fucking robots. This is because of frequent raids from random warbands and enemy villages.
·AESTHETIC IS GLITTER - PINK - NEON GREEN - FLOWERS - UNICORN CYBORGS - ELECTRIC BLUE CHEETAHS BITING THROUGH STEEL - ETC.
- Hiding is considered despicable. Announce yourself brightly, shine forth in glittering bravery.
- Almost everyone respects the right of a defeated soul to spill forth a fabulous death soliloquy. 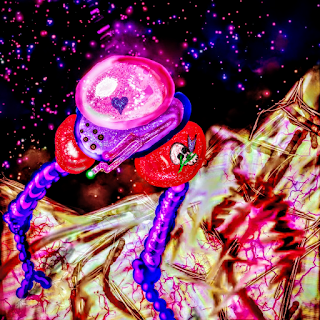 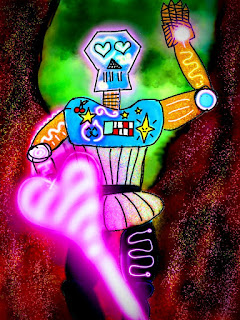 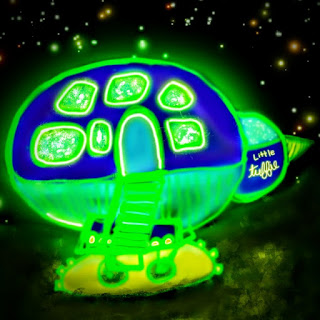 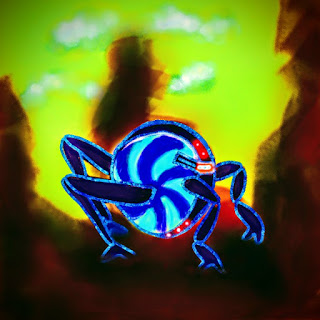 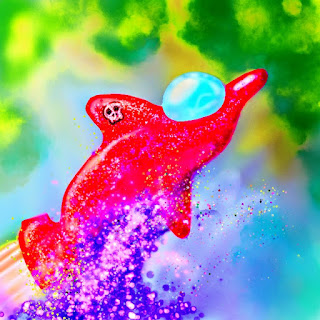 SkyDolphin Dazzle-Jammer
Armour 1, STR 13, DEX 18.4 Power, 2 Aux.Integrated System/s
Dazzle Jam - 4 Power - Target (robots only) is stunned 1 round, may only Move. For 1d4 further rounds -1 penalty to saves and damage as sensor systems continue to erratically fail.
Special, vehicle can dive to 2000’ below the glittery waves as well as fly or hover up to 1000’ into the mostly green sky. 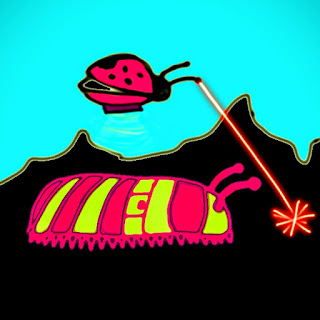 
Some Systems:
SuperViolet Pepper Box Pulse Lazer (Main)d10OP 2: Pilot must pass DEX save or be blinded for d4 rounds.Pizazz Twin MISSILE Platform (Main)d12+d4, +d8 vs soft targets. OP: Fire both at once. These missiles take 2 weeks and access to a big ol’ scrapyard and tools to replace.

Nano Singularity MISSILE (Aux)
d12.
OP: Nearby objects (including bots) are slammed towards the target. DEX save to avoid. These missiles require 1 month and access to a scrapyard to replace. 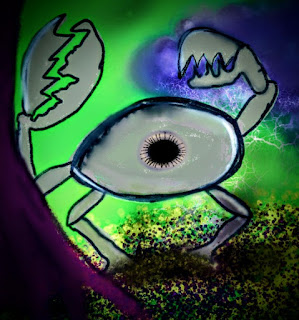 make up some botz and getz dramatic, y'alls!!

Posted by Evey Lockhart at 3:43 PM

"...Plutonic Bronze quite naturally occurs as an alloy of arsenic, tin, and, of course, copper.
"It's smithying has long been noted a deathly and morbid pursuit. Laming even the strongest of smiths as legend reports. The superiority of such blades even to quite excellent, tin heavy bronze is unquestionable.
"These are arsenical bronze only, however. True Plutonic Bronze is quite rare. It may only be mined by the blind and those condemned to die. Deep, deep, deep are the rare shafts in which the veins lie. The casts must be lined in the wizard's own blood and poured in the black of a moonless night.
"According to Meilanachus, wounds caused by Plutonic Bronze blades cannot be healed. To be frank, Your Grace, I've never investigated a claim by Meilanachus that was not true. I urge you to handle the blade as little as possible. Were you to nick your thumb, the cut shall stay with you unto your grave, may God-most-Censorious keep that day long at bay..."

- Excerpted from private correspondences of the Beige Duke..

It's all true, except the blood on molds thing. Which means you don't actually need a wizard, but, like, no wizard is telling anybody that.

Wizardry is a real feast or famine sort of business. The biggest customers always are rich assholes who want other rich assholes dead.

Anyway what it says on the tin. Damage done by these blades does not heal. So a PC getting popped for 8 damage from a Plutonic Bronze spear when they're level 2, 12 HP, they're gonna be at 4 HP tops, going forward. (until leveling or whatever)

If you have magical healing in your games, that don't work either. Sans the direct intervention of a powerful god, the wounds DO NOT heal.

Cuts that aren't held closed in some way, will of course continue to be a problem... 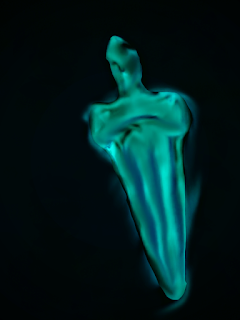 +1 to hit, +2 Damage against folx in less than Chain Armor. Damage dealt by this weapon cannot be healed.
Posted by Evey Lockhart at 2:58 PM