The need is there, but without context. The errand remains, but in a void of nuance, without understanding. Some almost forgotten impetus moves this remnant of a person, like a dark planet that cannot remember the gravitational forces which sent it hurtling through space. It only knows it now must move in this direction. Sometimes there is a sparking memory of the sun that birthed it and cast it away, but mostly it moves in muddled confusion in the only direction it can.

But this is not about that sad planet, this is about the worms and their errand.


"When a person dies with great suddenness in an area heavy with thaumaturgical potential, it is not uncommon for his or her body and being to rise up (or some parts thereof). Many of these wretched pseudoliving beings are well known and well documented. (See the thoroughly mediocre works of Maypole for several examples of this.)
"Still though, Worms of Errand are exceedingly rare. Like all Near-risen, a sudden death near to a thinning or tear in Reality's Veil is required. However the specific alchemy of the Worms of Errand require two unusual components:
"After the worms and their waste become the majority of the mass, the resultant creature will rise up in great confusion. It will eventually attempt to complete it's errand: deliver its letter, speak to the landlord about a creaking board, offer the widow condolences and a pie..."
- Bartholomew Harrold

Disparate bits of human memories, especially of the victim's final memories, flit haphazardly through the alien distribution of its new being. After a few days (1d6), the final errand coalesces into an overwhelming drive for the Worms. Bits and pieces of the victim's strongest personality traits and memories will also occasionally be expressed.

Looks? Well it looks like you'd probably expect it to: a writhing mass of necrophagic worms and rotting flesh pulled together into a vaguely human shape, sometimes still partially clothed. It smells like old meat. It sounds slick and slithery and wet, like many, many bodies covered in viscous effluvium squirming past one another. Eventually, Worms of Errand, learn to "speak" with these sounds. I don't think you want to touch or taste it. 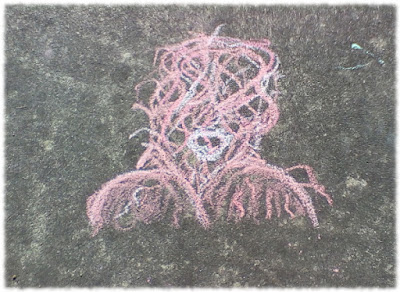 If helped to complete its task, the Worms will dissipate into a pile of what it's composed of... If destroyed, unless great care is taken to stomp out like 75% of the worms, it will form anew (in 1d20 minutes). Each time the trauma of its destruction becomes more likely to imprint on the new form, making it more and more dangerous.

Most eventually become the monsters folk presume them to be...

1 HD. 1 attack by weapon, usually 1d4 improvised club, though early incarnations are very unlikely to attack. Movement, Human Speed. Can only be totally destroyed by carefully killing almost all the worms.

---
So I've added a tip jar to the blog, in the form a Patreon Campaign.If you've gotten any worth out of these monsters, wizards, and classes and stuff, please consider donating. Any amount would be greatly appreciated and help to ensure I am able to keep doing this.

Thanks,Edward
Posted by Evey Lockhart at 11:38 AM