A Couple of Simple Ideas

Firstly, I've not been blogging much lately, at least not on this blog. Partly it's because I was getting a little bit burnt out, partly because I've started a daily creative writing blog, and partly because I'm working on a few small projects I'd like to sell to you. Add to that the one year old crashing around the apt. plus my day job, and the result yields fewer blog posts.

On to things you might actually give a shit about.

1 - Improvised weapons, some really, really simple rules. I usually run LotFP so tacking on complicated subsystems isn't something I want to do.

An improvised weapon (like a piece of firewood, a broom handle, a mallet, or a saw) wielded single-handedly does 1d4 damage. It also breaks on a natural 20. If it is something really fragile (like a moonshine jug), it breaks the first time you score a hit with it.

Something smallish you are using as a weapon, that wasn't meant to be a weapon (like a quill knife, a straight razor, or a wooden stake) does 1d3 damage. It also breaks on a natural 20. If it is something really fragile (like an icicle), it breaks the first time you score a hit with it.

Something largish you are using as a weapon in two hands (like a walking staff or a bar stool) that is not actually designed to kill people does 1d6 damage. If it is something really fragile (like a half full amphora), it breaks the first time you score a hit with it.

Often when an improvised weapon breaks, the resulting pieces can also be used to hurt people. d6  stool breaks to d4 stool leg breaks to d3 pointy bit of wood.

But what about a felling axe, stupid? Trees are way harder than people and axes don't break all the time.

Right you are, dick. Sturdier/heavier things like crowbars, wood axes, sledgehammers, and such, instead fly free or get jarred out of a character's hand. They really are not balanced properly for murder. This happens on both 1s and 20s and requires 2 combat rounds to retrieve. That means there's a 10% chance that you should have had a real weapon.

This one is easy. A buckler functions exactly as does a shield but only for melee attacks.

This one is a bit in the development phase but the basic idea is that each broad type of armor and weapons (and other stuff probably) has a certain number of adventures it can endure before needing to be repaired. At double the repair number most need to be replaced.

Leather Armor has a repair of 1 adventure. Just one outing to the dungeon and you're already having to stitch it back together or replace some cuir bouilli scales or whatever. After the next adventure you gotta buy some new shit.

Chainmail has a repair of 3. Going to have to replace a significant number of the rings after a few trips through the Troll Fens. Three troublesome hexes after that and you're gonna have to buy some new shit.

Shields have a repair of 1-3 depending on construction.

Platemail has a repair of 3, but importantly doesn't have to be fully replaced until 3x its repair point.

Wooden hafted weapons like polearms, most axes, and spears have a repair of 2.

Metal hafted weapons (like really fancy maces, axes, and warhammers) and well-made full tang swords/daggers/knives have a repair of 3 and don't need to be replaced until triple the repair number.

And if you spent all last session just talking to some demon, that probably doesn't count as an adventure for this purpose.

4 - Into the Odd is pretty fucking awesome. I'm really looking forward to running it soonish, and I think about game stuff with it in mind all the damn time. Really simple, straightforward rules with great atmosphere. You should check it out.

Posted by Evey Lockhart at 4:23 PM

A Narcosmos Monster: The Pentapods 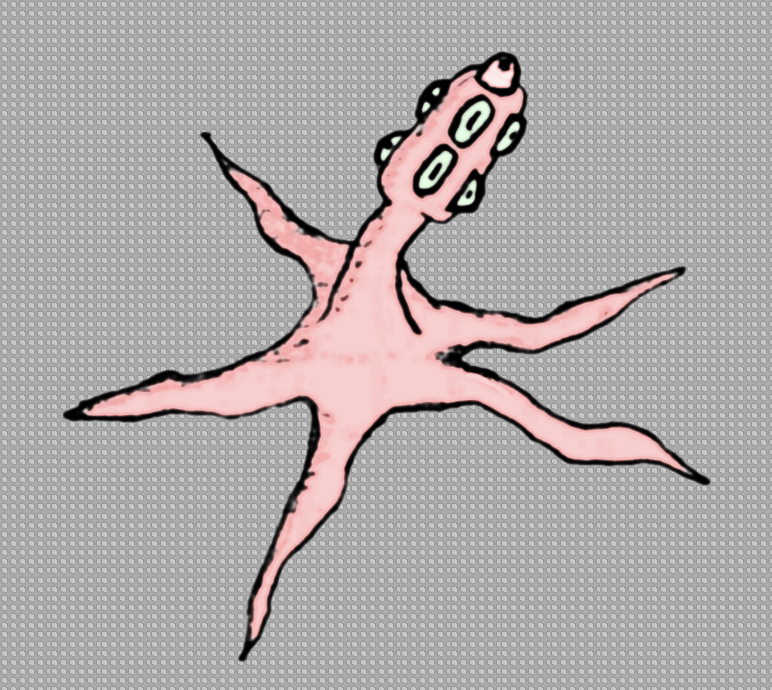 “Space is a strange thing, no matter where ya go in the multiverse. The space above and outside most worlds is big, mostly empty, hostile to life, and full of just really weird shit. And big, by gods, most of ‘em is big. And when ya consider that there’s practically an infinity of worlds, well it makes less sense for anything to not exist. Space hamsters? Sure, I seen ‘em. Whales a’wrigglin’ through the void, well, I seen that too. Worlds made of pure fire and moons o’ frozen yella slime. Yep. Space is godsdamned weird.”

The Pentapods aren’t really all that strange, considering they’re from space. Their head-pods stand at about 3 feet tall, and all five of those pink rubbery tentacles can stretch out to about six feet. They move in long graceful arcs and seem to find the idea of straight lines unappealing. Pentapods communicate telepathically and appear to have some sort of innate bio-kinesis, especially with slime molds, from which all their odd technologies arise.

At the heart of every Pentapod asteroid ship is a central nervous system of bio-engineered slime molds, performing all the tasks normally accomplished via circuitry (or magic) and mechanical means. They even keep certain specialized pools which synthesize various keratin-based tools onto the ends of their tentacles.

Five pairs of eyes are evenly distributed across their cylindrical head-pods. Even without this, sneaking up on them is nearly impossible, due to the 12 yd. range of their psychic awareness/telepathy. A strange bulbous sphincter sits atop the head-pod; this is the apparatus through which they breathe and expel waste. (They sometimes do this spontaneously when startled.) The central bottom part of the creatures contain several sets of gills and a tooth lined sphincter which serves as a mouth. Pentapods usually consume simple organisms like algae and bacterial mats. They can consume other organic material, but it usually gives them gas: it’s chlorine to be more specific.

Long ago, their swampy verdant homeworld was usurped from them by a cruel race of bipedal horse-monsters. Ever since then, the Pentapods have spread across the galaxy looking for a new world to inhabit. They seem to be driven by an insatiable curiosity and a distrust of beings with bilateral symmetry.

That’s great and all, bud, but how do these things get me high?

Well that’s a bit of a sad story, but you asked.

You see by some fluke of evolution, the brain-chemicals produced by Pentapods while frightened induce ridiculous euphoria in humans. After its gruesome harvest, this golden-green liquid is drunk by users under the street-name “Happy”. It’s addictive effects last for about 1d6 hours. Here’s the kicker though, any pain felt by a Pentapod significantly reduces the effects the “Happy”. Unfortunately bipeds are very clever and many have discovered some terrifyingly consistent ways to put out a good
product. "Happy" farms are some of the worst places in the galaxy. 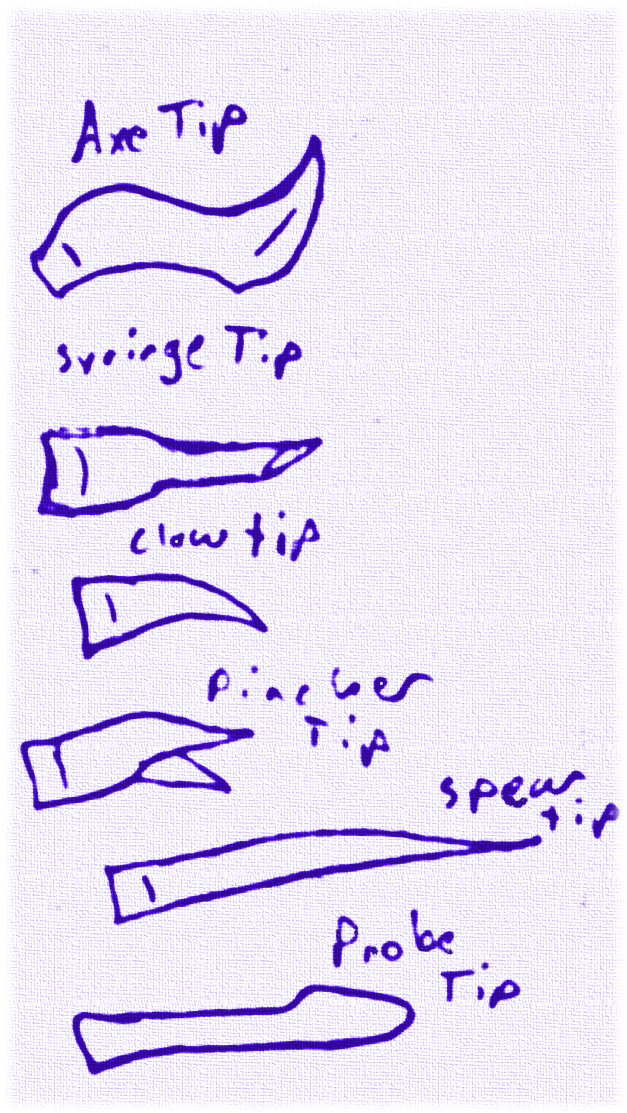 
Has an almost innate understanding of biology, anatomy, and medical science. A Pentapod colony can cure most diseases encountered within 1d20 weeks. Previous experience prevents most colonies from offering aid or succor to bipeds.
Posted by Evey Lockhart at 6:09 PM

Mouth of Many Teeth

This is one of the Fetishes from my new book, Fetishistic Arcana.

First gather you together a set of dead folk's teeth, each tooth from a different mouth. Put them all firmly into an artificial jaw of the best construction you can muster; it must be closed off by a backing of sturdy, black fabric. Then sew into the fetish a tongue from a great orator.

(The better crafted the fetish is the longer it will last: Crude Construction 1d6 uses, Good Construction 3d6 Uses, Masterful Construction unlimited uses. Note that the tongue rots normally, though this will not affect the fetish. Removing the tongue before it sloughs off on its own, however, ruins the enchantment.)

When Speak with Dead is cast through this fetish, an intact mouth is not required, just some piece of the dead person or an extremely valued possession.

With each use of this fetish, there is a 2% chance that the spirit of the deceased will permanently inhabit the artificial mouth.

So that's copied straight from the book, but here's a bit more.

Why does this fetish matter?

Well, I guess you may not be using Lamentations of the Flame Princess (all of the fetishes were written with that ruleset in mind). Maybe your ruleset doesn't specifically require an intact mouth for Speak with Dead. Well finding the ancient king's favorite pinky ring is probably still easier than finding his skeleton. And when you gotta have some ancient exposition, you gotta talk to some ancient folks.

Also, that 2% chance of permanent habitation could be a big boon. In fact it could be the point of the fetish. PCs could try to raise that chance with things like summoning circles or negotiating with the deceased. In fact I'd knock that % up to 50 if they put some effort into it.

That's the whole point of Fetishistic Arcana, to get characters to do weird shit for magical reasons.

Anyhoozle, you can buy my book here.
Posted by Evey Lockhart at 10:02 PM