I do not like clerics. They don't fit their supposed niche as holy warriors. They're just sort of half-assed spell casters who only use blunt weapons for… reasons. They aren’t anything like St. George, a Knight Templar, nor Sir Gawain. Paladins actually fill that role and do it well while looking the part.

I did/do like specialty priests in 2e. In fact when I ran 2e, I only allowed specialty priests. If you wanted to worship a god for magics, you should look like you worshiped that god, instead of say, looking like a dude/dudette with a mace who said “Thor” instead of “Zues” or “Jesus” or “Whateverius”. So while I've been busy house-ruling LotFP, I've decided to drop clerics entirely.

Yet, there is a long tradition of gods, demons, and godlings granting folk magical power via ritual in history, myth, and literature.

So I gave all the cleric spells to magic users, with some caveats.

To be able to cast any particular spell from the cleric list, a wizard must seek out forgotten demonic grimoires or lost holy texts. Therein, he/she will learn the sacred/blasphemous rites with which to entice power from some particular demon/godling/angel/saint/whatever. (None of these powers will have a monopoly on any particular spell so a character can seek out a different source if a ritual happens to be too repugnant. [Unless, of course, you want a particular power to have that monopoly on a spell for some reason.] These spells are castable daily, in addition to the character's normal magic user spell slots. One cleric spell cannot be traded for another

Here is a short ritual generator, to give you an idea of what sort of rituals I was thinking of…

How often does a caster have to deal with this nonsense?

If a magic user wishes, he/she can give up 2 of his/her 3 starting magic user spells to be able cast a randomly determined Cleric Spell. It will be assumed that he/she already sacrificed enough souls or completed the appropriate ritual or whatever. (This will of course give the character two spells to cast daily at level one but with fewer options.)

Those who master both ritual and academic magics are known amongst the initiated as Wizards. Those who seek the indirect path to mystical strength and rely on fickle entities for power are commonly termed Sorcerers, Witches, or Warlocks. Finally, those who abstain from entanglements of forgotten godlings and other petty spirits term themselves Mage or Magi. (Common folk, of course, simply call them all scary as fuck and burn such folk at the stake [if the common folk think they can get away with it].)

Alright, so if clerical magic comes from demons or angels or whatever, where does the other kind of magic come from?

Do you just want me to design your whole setting too?

Anyway, it comes from the Feywode, Álfheimr, the Land of the Hidden Folk. This is a twisted, dreamscape that mirrors and intersects with the mundane world but is inhabited by fairies, angels, demons, and other weirder things. It’s also full to the brim with “Creation” or “Chaos” or “Terrible Radiation” depending on your perspective.

Academic magic teaches specific, repeatable mental and physical practices which breach this other world and draw off some of its power. This power is then carefully directed by the magic user to accomplish a specific task.

Every time a magic user learns a new spell from the magic user list, he/she must make a saving throw vs. spell with a penalty equal to the spell level. (At the DM's discretion, wisdom, intelligence, and/or charisma modifiers may be applied to this roll.) If he/she fails this saving throw, roll on your favorite horrible mutations chart. If you are a dick, you can make starting characters roll saving throws for their beginning spells too…

(For my home campaigns, I allow/force magic users to spontaneously learn a single spell when they obtain access to a new spell level. This happens overnight, and the character may sacrifice a night of sleep to feverishly record the spell into his/her spell book. Of course, he/she may instead immediately cast the spell to divulge his/herself of its influence [and therefore not have to chance a roll on the mutations chart].)

And that’s what I’ve decided to do with Clerics and to Magic Users.


Lamentations of the Flame Princess & the LotFP abbreviation are totally © James Edward Raggi IV.
Posted by Evey Lockhart at 10:58 AM

Dwarves are built of dedication, intractability, and stolid grim refusal.*

Gnome, a new class for LotFP.

Gnomes, so far as anyone can tell, spring fully formed into the world.  Gnomes have no real conception of their beginnings. They exist. There are new things to be learned, problems resolved, progress to be made. The past is useful because of lessons learned, but nostalgia is without purpose.

Most scholars suppose that gnomes are formed from the dreams and desires of men leeching into the Feywode. Other scholars believe that gnomes are born from the despair of great men who failed to accomplish great ends. Some scholars are clearly frustrated poets. It is likely best that they only haunt us with their mediocre scholarship and not their abysmal poesy.

Gnomes, though actually being sexless, appear to be very short men or women, on average slightly taller than most halflings. Silver, white, or gray hair and prodigious noses (whether hooked or bulbous, gnome noses are large) round out their defining physical features. Otherwise, they can have any features that men have. Gnomes typically live for 100-200 years unless slain.

At the center of every gnome’s being is the desire to practice some particular manner of art or craft, his/her Drive. Be this craft mechanical, scholarly, or artisanal in nature, the gnome is compelled to perfect his/her Drive. Most gnomes are well received by human communities excepting those tradesmen with which they compete for business. Adventuring gnomes simply have a Drive that requires travel or field testing. For instance, a knife maker may need firsthand knowledge to perfect the smithing of fighting blades, or an apothecary gnome may need to visit odd places to gather new knowledge and specimens of diverse flora. (Having traveling companions insane enough to try experimental blends of medicinal herbs would be a boon to the apothecary gnome as well.)

Game Stuff:
Gnomes have the saving throws and hit dice of a Cleric. Like halflings, gnomes can’t use large weapons and must use medium weapons with both hands. Gnomes are exceptionally gifted at identifying the form and function of mechanical contraptions. Therefore, they begin play with a 3/6 in Tinkering. This rises to 4/6 at level 4, 5/6 at level 7, and 6/6 at level 10. Gnomes also have 5/6 skill in their Drive (which becomes 6/6 at level 10). Finally, gnomes may cast a single spell per day from the Gnomish Spell List so long as they are unencumbered.

Gnomish Spell List:
Illusion (New Spell, See Below)
Light (Many gnomes instinctually cast Light as they continue working late into the night.)
Fairy Fire (The outlining hyper-light of Fairy Fire is often used by non-adventuring gnomes to detect flaws in workmanship and materials not quite visible to the naked eye).

By means of this spell a gnome may create an illusion of anything he/she desires. This illusion may be composed of elements interacting with the following senses:

The caster can create an illusion with a number of sensations equal to his/her level.

The illusion lasts so long as the gnome maintains complete concentration. He/she may speak in short, simple sentences but may not move at more than a snail’s pace. There is one exception; a gnome may perform work related to his/her Drive while maintaining an illusion. In fact, many gnomes do this spontaneously while working. This allows them to plan out complicated procedures as they’re performing them.

Tactile sensations are a definite weakness of illusions.

I've also got an alt-history/fantasy early colonial Americas setting bouncing around in the back of my mind. The weird elves, gnomes, halflings, and dwarves would be in it.

*Rules As Written. These Dwarves are gonna be hard-ass vikings, I think...

Posted by Evey Lockhart at 3:02 PM

One of my entries for the OSR Superstar Contest: 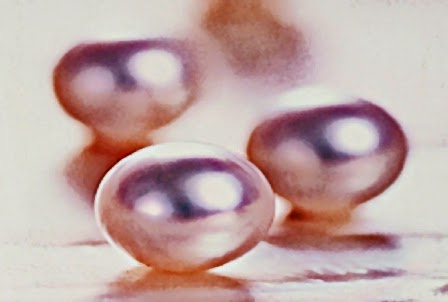 The Eggs of Creation / Seeds of the Enemy

“The Scrolls of Light speak of these cursed things. The Seeds were the Old Enemy’s greatest weapon. It forged them in the Gray Ages when the forces of Chaos controlled much of the world. These fell Seeds blossom into bloody change, perpetuating disorder…”

“The Eggs, the Eggs, they are stark hard beauty. Inside is a small piece of Creation itself. Breaking them releases Creation to crash again against the Stagnation of the ordered gods. The Eggs are wishes fulfilled. They are the hope of forward motion. They are ruthless, random elegance…”

The Eggs of Creation, also known as Seeds of the Enemy, are found in clutches of 3 or 5.

These small, pearlescent, slightly flattened ovoids seem unassuming enough. They certainly appear to be valuable, but this belies the stunning power held within them. The only clue to an Egg’s unusual nature is that sunlight reflects black on a Seed’s surface. They radiate no magic.

The powers of Law fear the change, violence, and disharmony the Seeds represent.

The powers of Chaos see the Eggs as sacred reminders of the inconstancy of existence.

The Eggs/Seeds cannot be broken by accident. They are harder than adamant until a being intends to break one. With that intention in place, however, the Eggs/Seeds are as fragile as thin crystal.
When one is broken, a single Boon may be asked. This Boon must be spoken aloud in a single non-compound sentence (no conjunctions, semicolons, etc.). Anything may be requested, similar to an Unlimited Wish. When an Egg/Seed is broken, roll 1d6.

1. The Boon Happens as Desired with Mild Repercussions. Something odd but ultimately inconsequential on a large scale happens: E.g., everything within a 1d100 mile radius is now blue [or red or green or yellow]; or perhaps the requester is now part flower (but which part?).

3. The Boon Happens but Reality is Altered - All the gods have their alignment and temperament flipped, but keep their portfolios. (Chaotic to Lawful, Lawful to Chaotic, Neutral to Chaotic or Lawful [choose whichever is most interesting or flip a coin]) Example: Suddenly there is an orderly and benign god of murder and an insanely violent god of justice. Everyone remembers the way things used to be, except for the gods. Angry confusion ensues.

5. The Boon Happens but Reality is Altered - Magic is fundamentally different now. Was magic exceedingly rare? Now it is very common. Was magic a gift of the gods? Now it is an innate part of sentient beings and a blasphemous affront to the faithful. As an example: All Clerics now cast Wizard Spells and Wizards now cast Cleric Spells. This is the way it has always been. Spell-casters present at the breaking of the Egg/Seed are unaffected, and only those present remember the way things were.

Eggs/Seeds from the same clutch CANNOT undo what is wrought by another Egg/Seed. Those from another clutch may be used to undo both the Boon and Repercussions of an Egg/Seed (but not the Boon or the Repercussions alone).

Ancient verses speak of several clutches hidden throughout the wide breadth of the world. The forces of Law strive to have the Seeds remain forgotten and lost in their dark, forgotten corners. Creatures of Chaos seek to bring the eggs forth again, shining black in the bitter daylight.

Once a Repercussion has occurred, the GM may wish replace that entry in the chart with some other consequence.

You may recognise a version of that chart from another article. If you do then you are paying far more attention than I suspected.

Posted by Evey Lockhart at 6:07 PM