These are the Guilds that rule the city-state of Cronnon: 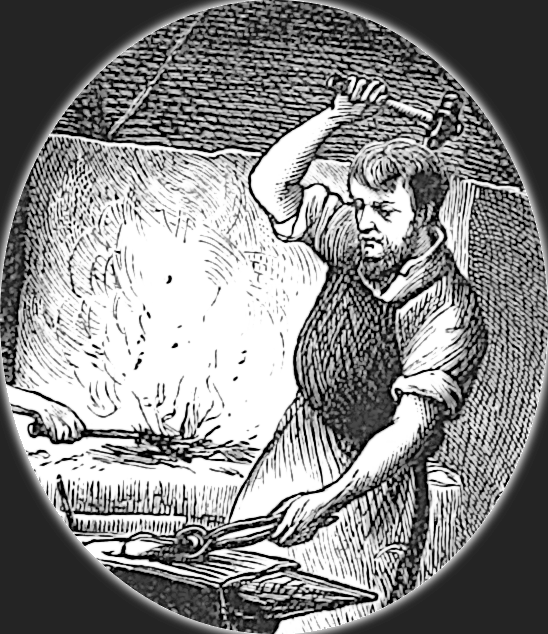 The Bound Brotherhood of Blacksmiths (a.k.a. Soot-eaters) - The Brotherhood lead a voting block of metalworking tradesmen (Redsmiths and Goldsmiths). Their higher officers receive more training in political chicanery than smithying; it's quipped, "Most soot-eaters are better hands with a gavel than a hammer."

Cronnon Company of the Red Metals - This is an association of redsmiths (workers of copper, brass, and bronze). Some few of the Company are skilled in the art of clockwork and capable of producing unusual mechanical devices.

The Good Guild of Goldsmiths (a.k.a. Misers) - The Guild, a desperate alliance of gem-cutters, jewelers, coin-minters, and goldsmiths, was formed just after the Downfall. In this era without luxury, they know that their most valuable asset is a vote on the Senate floor. In fact, the Misers are in secret talks with the Association and Free Fellowship to wrest power from the Brotherhood.

The Modest College of Tinkers - (Whats a Tinker? It's an itinerant tinsmith.) This loose collection of independent wanderers are represented by whomever happens to be in town and also willing to stomach the Senate's blatherings. Traditionally the Tinkers are opposed to whatever schemes the Soot-eaters are trying to pull.

Free Fellowship of Handicraftsmen (a.k.a. Mud-weavers) - The Fellowship is an odd assortment of weavers, seamstresses, chandlers, potters, and other skilled laborers unrepresented by the rest of the Senate. The Mud-weavers are the most internally divided of the guilds. There a so many factions working at cross-purposes within the organization, few outsiders stand a chance knowing how the Fellowship's vote will be cast.

The Undivided Society of Stonemasons (a.k.a. Block-Os) - Being the only folks capable of making lasting repairs to Cronnon's crumbling infrastructure has given the Block-Os undue political capital. They are not above leveraging their skills in obvious or even public acts of extortion.

Sturdy Lodge of Woodwrights- The Lodge is a friendly order of carpenters, loggers, wainwrights, and wood carvers. Most in the lodge display a genuine sense of fraternity for their fellows, in sharp contrast to the other Senate guilds. As fellow travelers in the wild, there are often strong connections between the Lodge's loggers and the Tinkers.

Association of Brewers, Cooks, and Bakers (a.k.a. Cookies) - Though both teamsters and farmers are officially unrepresented in the Senate, these folks have a staunch ally in the Association. In fact, there is some talk of the Association using their strong ties with the teamsters as leverage against the other guilds.

Fraternal Order of Barber-Surgeons and Apothecaries - The Order dedicates itself to guarding the secrets of the healing craft. Most of the Order are aloof, arrogant, and though necessary are not well-liked. Rumors have it that the Order has a great deal of knowledge in the ways of poisons as well.
Posted by Evey Lockhart at 9:32 AM