Purpose: A stunning spectacle of enormous natural power as well as a dichotomous setting to be endured, explored, and escaped. Smallhope and Hindgut highlight the extremes of dogged hope and surrender. One looking forward even though it is perpetually battered down; the other turning away and becoming forcibly insular.

Appearance:  The great turtle is unimaginably huge. Maelstrom Malachite's scaly skin and rocky shell are subdued shades of seafoam green. A whitish crystal-like ridge forms a spiny crest across its back. Sailors have mistaken it for some uncharted, wondrous islet. Few have lived to speak of their error.

When its cavernous jaws stretch open, the resultant suction is so great as to form an actual maelstrom. Whole caravels have been swallowed by the cyclopean creature.

It is always encountered in the open ocean (though legend speaks of Maelstrom Malachite [or its ancient kin] actively destroying coastal cities).

Descriptors: Like a typhoon, a tsunami, or an earthquake, Maelstrom Malachite is not so much a creature as an inexorable force of nature. It would take an absurd amount of power to slay the beast.

Ecology: Within the living walls of the creature's great gut, a pale candle of civilization endures. This is made possible by two ponds of fresh water and dim rays of sunlight filtered through its rock crystal spine.

A thick layer of swallowed sand coats the stomach bottom. The fleshy, pink stomach walls are surprisingly resilient. Though some few have tried to cut their way out of the belly of the beast, Maelstrom Malachite heals faster than they could mine.

The makeshift settlement of Smallhope lies close to the creature's maw. Its denizens wait in hopes of escape. Restlessly, they spin theories and make bets on when the mouth will open again. With every crushing swallow, the camp is washed away to be rebuilt anew. The populace ekes out a living searching through wreckage and flotsam, 'til they die or lose hope. The pond near Smallhope turns brackish with every swallow; this is when trade with Hindgut is the heaviest.

The GrayGreen Morass is a fetid marsh of vitriolic waters, foul vapors, and algae. Some speculate that this is Maelstrom Malachite's actual digestive tract. This would, of course, mean that there may be an exit contained therein... if you don't mind being digested.

The Fungal Forest is filled with tree-sized, woody mushrooms of a stunning number of varieties. Though many who wander its saprophytic trails are never seen again.

Hindgut is a small collection of permanent structures built of carefully salvaged flotsam and driftwood. The citizens rule themselves by direct democracy at weekly town meetings, held in Whalebone Hall. They even managed to farm a few shade-tolerant vegetables, mostly greens like kale and lettuce. By city law, full citizens are not allowed mention the outside world while in public.

So there it is. A really, really ridiculously big turtle, for your gaming pleasures.

So I've added a tip jar to the blog, in the form a Patreon Campaign.If you've gotten any worth out of these monsters, wizards, and classes and stuff, please consider donating. Any amount would be greatly appreciated and help to ensure I am able to keep doing this (seeing as this is now one of my few sources of income).
CLICK HERE TO CHECK OUT MY PATREON PAGE

Thanks,Edward
Posted by Evey Lockhart at 9:19 AM 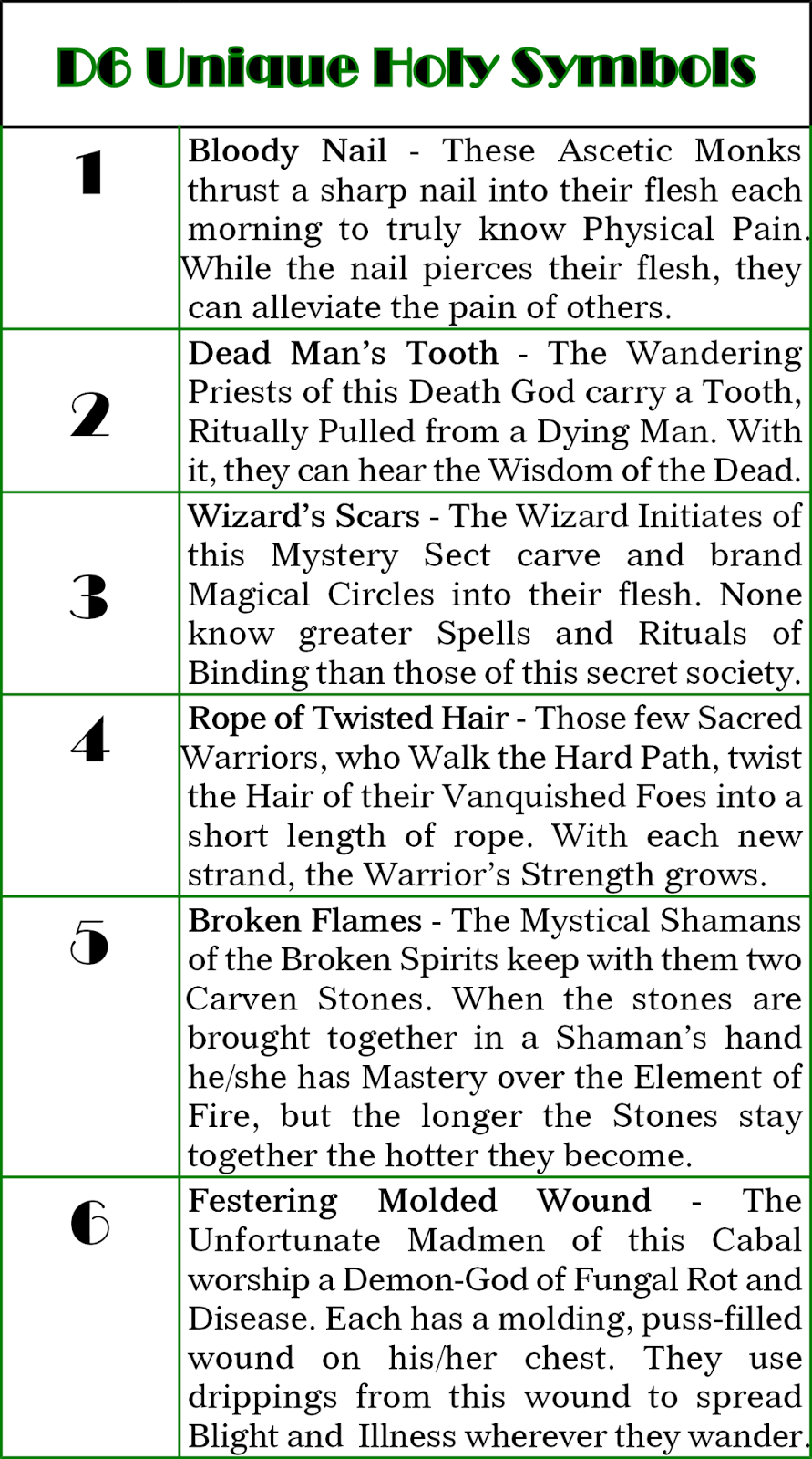 #6 comes from Actual Play. In my buddy Joe's Lamentations of the Flame Princess game, I played a cleric of that deity. It was gross and weird and quite fun.The idea for the deity and holy symbol were mine, but Joe's killer Hedonism-Bot-esque interpretation of the foul devil-gawd was simply inspired.

Should you unleash this disgusting demi-power upon your world, I recommend playing it as a lazy and indulgent being who takes an almost sexual pleasure in slow, moist destruction. Draw out all its syllables and speak in a smacking wet tone of voice. It's totally ill.
Posted by Evey Lockhart at 9:31 AM

Purpose: The Wretched Grasp will serve as a wellspring of tension when normal-seeming animals and objects viciously attack and drag away the unfortunate, screaming into the unknown.

The Grasp could also become the Player Characters' first horrifying step into other realities or even kick off an entire campaign. What better way to bring PCs together than to make them all victims of the same unimaginable plight?

Appearance: The Grasp can look like dozens of separate, ordinary things, that’s the real killer of it. A cat, an eel, a coil of rope, a vine, an octopus, or pretty much anything else that has a tail, tether, or tentacle. It appears to be normal flora, fauna, or materials with one exception; some piece of each “arm” will be far longer than it should… Within its watery home [the amoeba-like Grasp] undulates and shivers in constant motion… at the very center of the terrible mass lies an enormous eye, glowing softly green. The great orb darts about, holding all that moves in its quivering glance…

Descriptors: The Grasp arms attack all at once, seeking to bite, claw, and entwine its victims’ limbs. It will continue to attack those nearby, at random, until all it’s “arms” (from 3-13 usually) have hold of someone. The actual damage from the initial attacks is minor. Once its grip is set, the Grasp begins to drag its prey towards the widening dimensional ruptures in fitful violent bursts. In only a matter of seconds, the last of the victims can be drawn through...

Now Available at Drivethrurpg. (Follow the link for more of a Preview.)

Stay tuned for a peek at the "Wretched Beginnings" Adventure...
Posted by Evey Lockhart at 12:45 PM 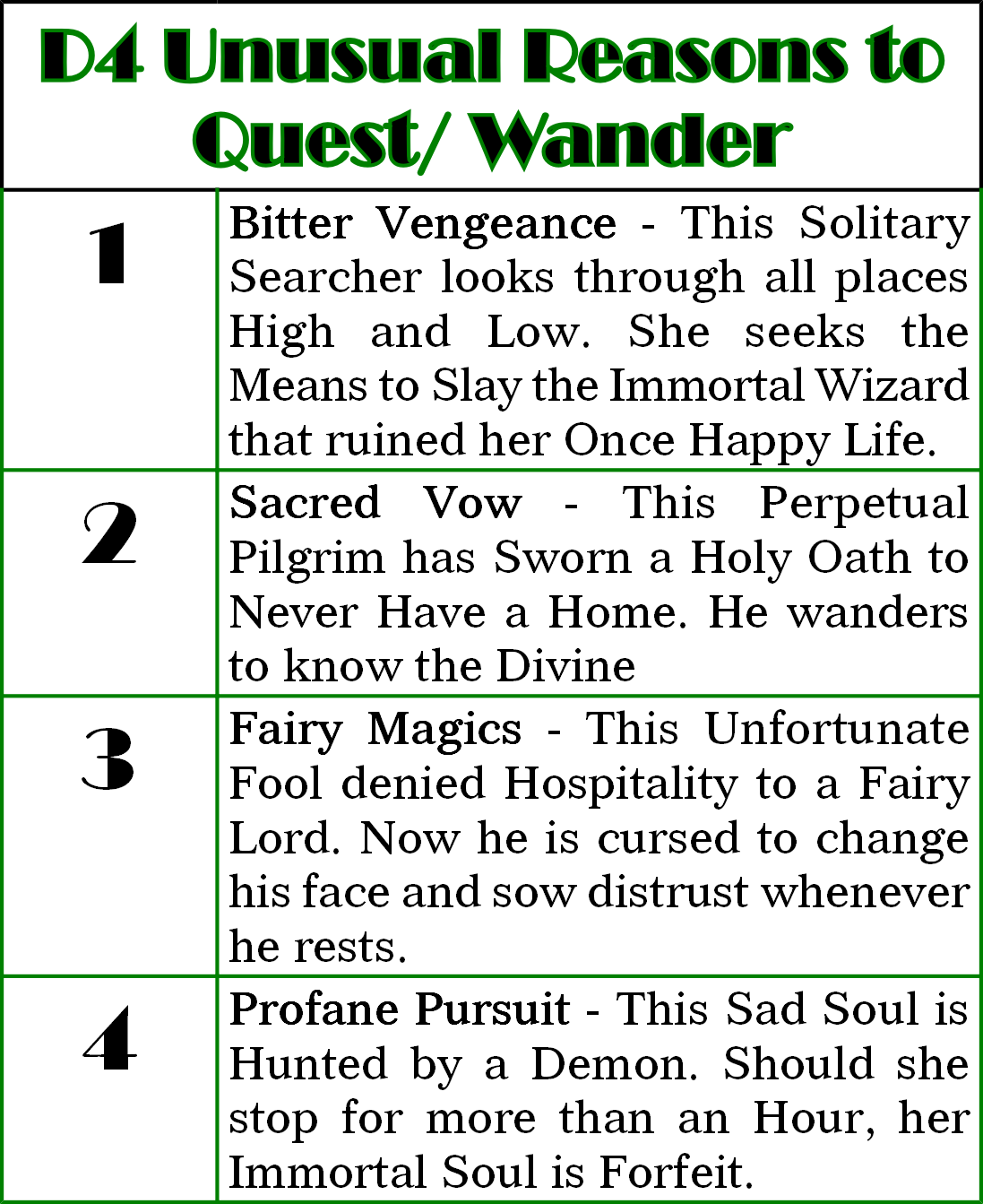 Posted by Evey Lockhart at 9:06 AM

I just realized that I've been operating this here Blog Thing for one full year as of today. At present the Blog has had ~11,000 pageviews. That's pretty phenomenal considering this is an obscure RPG Blog that came out of nowhere. (Especially, since I didn't really have a firm grasp on what I was trying to do at first.)

Trying to adequately thank you, my readers, for this experience is kinda like Squaring the Circle or Folding Fitted Sheets; I might get close but the task is at its core, impossible.

So in lieu of trying, here are a couple of pictures I GIMP doodled. I hereby release them into the Public Domain.

Do to them or with them as you will. If you happen to stat up the Cosmic Kitty, do please let me know about it. My favorite parts of running this blog have always been when the communication was 2-way.

Thanks Again, Ya'll.
Posted by Evey Lockhart at 3:27 PM

Email ThisBlogThis!Share to TwitterShare to FacebookShare to Pinterest
Labels: update

From The Spinner's Seekings, Scroll 17 "The Storied Cave and the Three Ridges 'neath Whitewashed Skies"

"...Behold you then the Golden Vale. Walk forth into the Cave, but only through a Cleansing Screen of Sacred Smoke. There you will find the Old Stone, and on it the Blessed Cup. Clear your Mind of Doubt. Pour forth the Sweet Oil from the Long Vial. Light it quickly, Child. Look upon the Deep Flames 'til they burn themselves to Naught.

"Go ye forth from the Cave and you shall know the Pull, but TURN NOT AROUND, Child. Walk swiftly to the First Ridge and then it is Safe to Turn, though your Journey will be for Naught.  You will remain in the world, and the Cave will hold Nothing for ye, all the rest of your days.

"Ignore ye the Pull, that Siren Song, and Take the Hard Walk to the Second Ridge. Turn Around there and you shall be in Fairy. And too shall ye be Welcome there. All Fey Folk and Wild Things shall know thy Place was Hard Won.

"If thou Canst, withstand the Pull as only a Hero may, and Walk ye to the Final Ridge. Turn Forth and Pierce Ye the Final Veil. In the High Places thou will be. Secrets and Songs and Sacred Sayings you will find, beyond the Ken of Men. Though you but Leave as a Child, a King you shall Return."

This was supposed to be an article about my experience with G+ Hangouts gaming yesterday, but my wife went into labor instead. How inconsiderate.

I'm still processing the experience... probably will be for a lifetime. It was at the same time completely natural, totally obvious, and inconceivably surreal.

I'm trying to summon some snark for a snappy one liner, but it appears I'm fresh out. I have, however, already scetched out a poem to commemorate the occasion (because that's the sort of thing I do.)

I dont know how this relates to rpgs. Something about events happening on multiple levels of awareness and feeling two ways about the same thing maybe. I dunno; you figure it out. Looks like I'm gonna be busy.