Just Go Ahead and Try It

This article was inspired by a comment from +Cavin DeJordy on a previous article. "I suggest that any GM try these ideas, and not to be discouraged by failing to please your players. Any feedback is good feedback, and broadening your storytelling range is never a bad thing."

I consider myself a pretty good Gamemaster. I've gotten quite good at rolling with the punches and reading my players to make sure everyone's happy: I've only gotten this far because I tried a ton of shit that just didn't pan out.

Here's a list of (some of) my more recent failings:


If there's something you want to try, try it! No amount of reading about it, talking about it, or considering it will give you the same visceral & direct feedback. Dive right in, ya'll. A good game can survive much more failure than you might expect. When it doesn't work? Just be guy/gal enough to admit you failed, try to fix it, definitely learn from it, and move right on.


Til next time, May you roll max crits in times of need, and never be ashamed to roleplay to the hilt, really ham it up.

*Actually all these examples are from the same game. (The game I was running in my Southern Marches microsetting.) That's a lot of failure in just one short campaign. If anyone is interested, the game started in Savage Worlds and switched to the Puddle for the finale. The conversion was ridiculously easy. Character creation in the Puddle essentially consists of writing down 6 things about your character. The session went well, despite our lack of understanding and my lack of preparation. Sometime in the distant future, when the stars align, we may pick these character's up for more adventure. (And if the players don't totally capitulate, I may ask them to convert the characters to my system, Grit.)
Posted by Evey Lockhart at 12:09 PM

The Bottom of the Barrel

The soup du jour, over at +Gnome Stew , got me to thinking.

How does one go about serving the first helping of a campaign?

My buddy Joe does so thusly. (In the form of another stew-related metaphor, gods help us!)

I like start with a location. I've got a visual mind. (Though not so much as this guy. [I additionally lack his skill in putting my mind to paper]). I craft the location and what's going on there, first. Then I let the magic of character creation (o! sweet collaboration) happen. I really love the challenge of adapting my location/events to the characters at hand. (Sometimes I'll make some thematic demands, but these tend to be light: Please make characters that would be willing/useful to work as town guards.)

But, (as I mentioned already on the stew) I've got one more trick up my sleeve. I tend to start the characters out in a pretty desperate situation. I want them PCs broke, lost, beaten-up, in debt, on the lam, and generally in dire straights (probably not all at once). It may seem like a dick move, but I don't think so.

It makes sense that people take more risks when they're between a rock and some lava and a hard place. It creates an opportunity for even the most milquetoast type of characters to reasonably take up a life of adventure/crime/magical-seeking/jumping-down-rabbit-holes. It generates opportunity for excitement at every turn (more or less). It really ups the stakes. [generic exclamatory statement]!

Plus, in my experience, players enjoy it. Crawling up from (or chopping right through!) the bottom of the barrel is a satisfying experience.

Just some food for thought and hopefully something useful.

Posted by Evey Lockhart at 4:09 PM

How to Destroy Your Fantasy Campaign

A while back on reddit, I proffered some advice on modelling gifts from beings that are beyond even the gods. I came up with this simple, inelegant, and altogether dangerous chart. It might possibly be of use for those willing to leave catastrophic power in the hands of the players. (This chart would also be good for modelling what happens when insanely powerful magic goes pear-shaped.) Enjoy.
----
After enacting ancient forgotten ceremonies, and performing a service, each character may, only once, call upon these primordial alien entities to grant them a boon.

Basically the players can ask for anything to happen (DnDers: like an uber-wish spell); with the caveat that the characters can't use complex sentences: no conjunctions, no colons/semicolons, no run-on sentences, etc. Essentially it must be a subject-verb-object request.* However, these beings have an imperfect understanding of the mortal mind so roll 1d6 and consult the following table:
If you feel you must, reroll any previously rolled results.
----
Use with or without Caution.


*The opposite of that previous explanatory sentence.
Posted by Evey Lockhart at 3:38 PM

In essence, there are only three basic plots*: Man vs Man, Man vs Nature, and Man vs Himself. This may seem limiting. The reality, as we know from television, movies, and literature, is practically infinite. Combinations of these conflicts in addition to considerations of scale and the devil of details broaden these simple forms to encompass the whole of the human story.

When you understand that man against monster falls in the Man fighting Man category (assuming the monster can think), it's pretty obvious which of these conflicts gets used the most in our hobby. That's a bit limiting and can lead to a boring, predictable gaming. As both Players and Game Masters, we would do well to consider the other two types of conflict.

More than simply throwing unthinking animals/monsters at the PCs, conflicts with nature explore the hostilities of the environment. The baking and lifeless desert sands, the austere and unforgiving vacuum of space, the shadowy and trackless wilds of a primeval forest: all these can leave a PC just as broken, bruised, or dead as any fiery alien or brutish ogre. 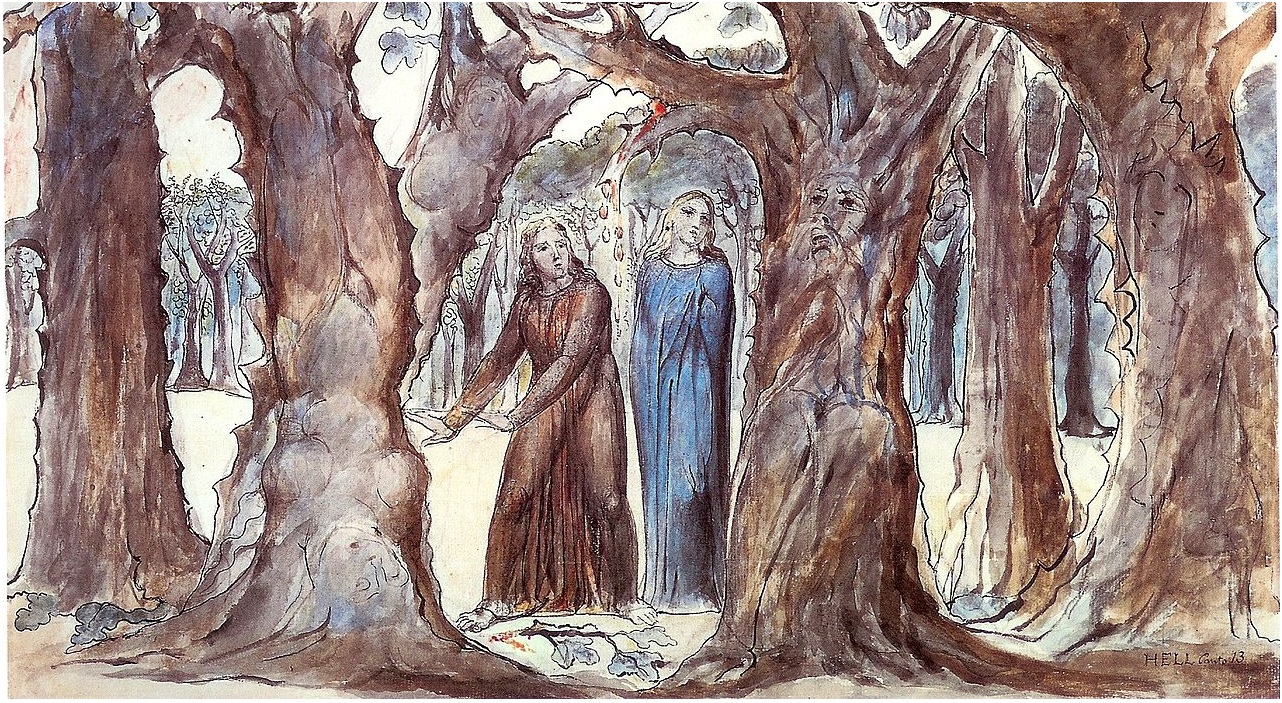 
This one is trickier. Some groups do this naturally. Players make characters with the expectation of moral and emotional dilemmas, with the expectation of growth. Some GMs have a knack for pushing emotional buttons and crafting moral quandaries into encounters. Even if the game you're playing doesn't support these things mechanically, there's still quite a bit you can do. 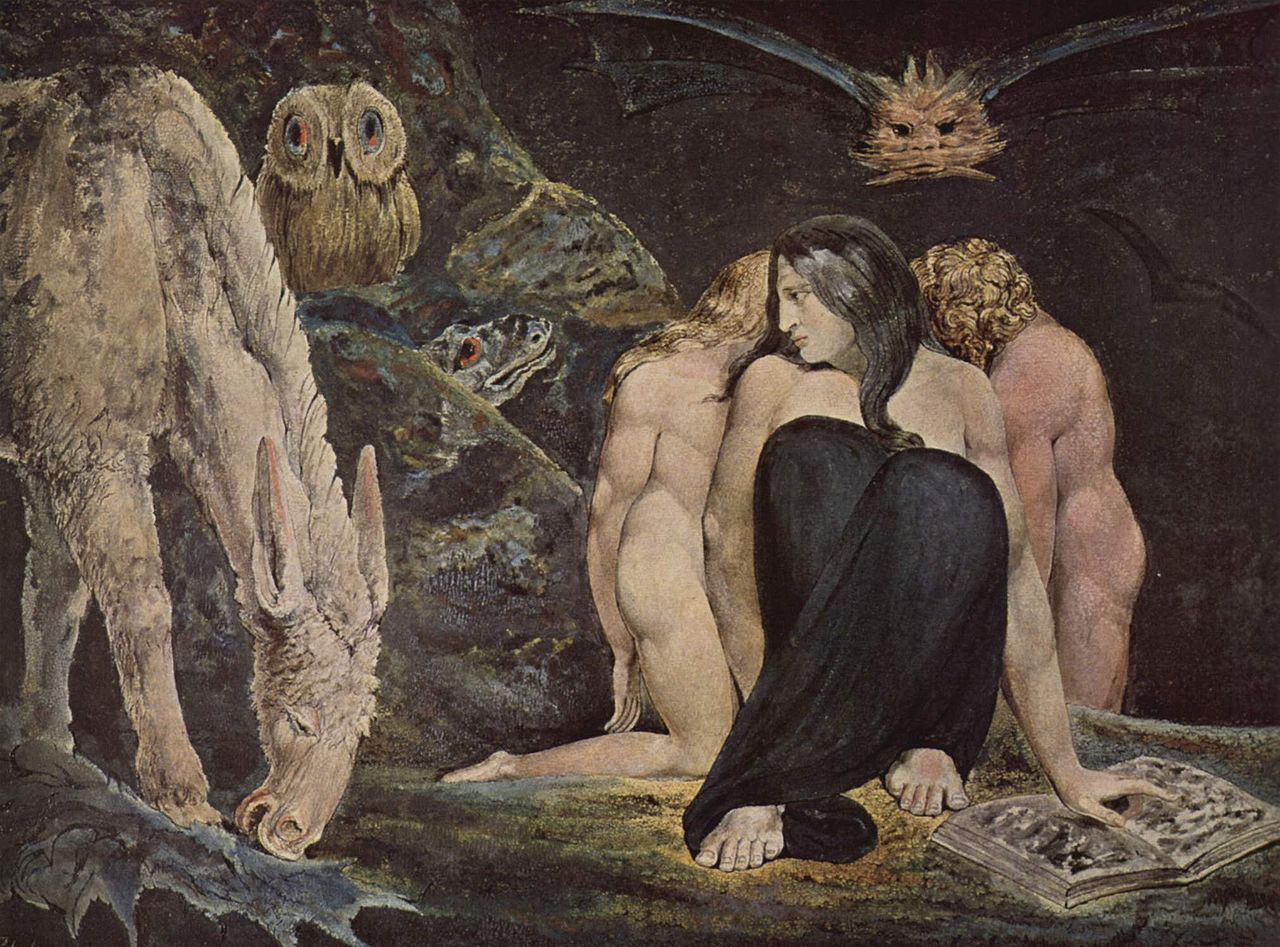 Players
Game Masters
This is far from an exhausting treatise on the topic, just a few thoughts and some hopefully practicable advice for broadening your games. Plus it's an excuse to use my English Major education. Woohoo! Esoteric applications for esoteric knowledge. Tune in next week for an application of New Criticism to Roleplaying Games!**

*I know these are actually conflicts; I would argue that sans conflict there is no plot, how very Randian of me.
**Not Likely.
Posted by Evey Lockhart at 10:33 AM

I've been designing a really rules-light story game for the past week or so. For it, I wrote a little blurb about social contract type stuff, in the form of additional rules. Upon further reflection, it occurred to me that this list could possibly be helpful and/or entertaining in a more generic sense.


Without Further Ado, "Some Other Helpful Rules:

Posted by Evey Lockhart at 8:41 AM

More Clutter For Your Gaming Table

Spaceships. They're pretty damn cool. From Serenity to the Enterprise, the humble and/or mighty spaceship is a huge part of Science Fiction. It's a home, a means of adventure, and in many ways a character all to itself.

Previously, I've made mention of my love for Cosmic Patrol. Ships don't really come front and center in the Cosmic-P*. I can understand why; a complicated equipment list of fully-spec'ed ships wouldn't really fit the style of that game. Still though, I think there's something missing without a good way to bring the radioactive-rocket-powered awesomesauce of ships front and center. So here's my attempt to fix this issue, presenting the Cosmic-P Spaceship Sheet. 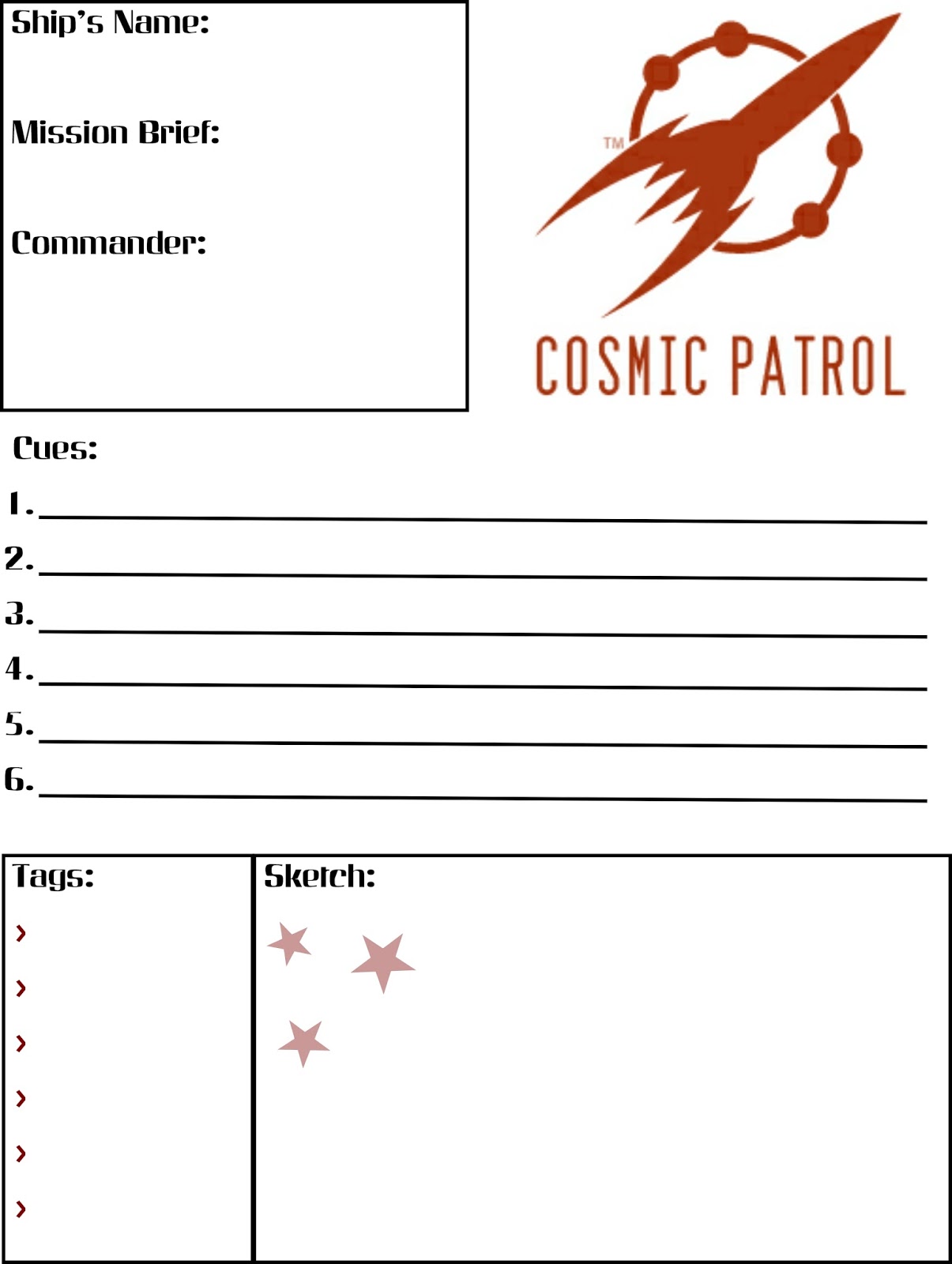 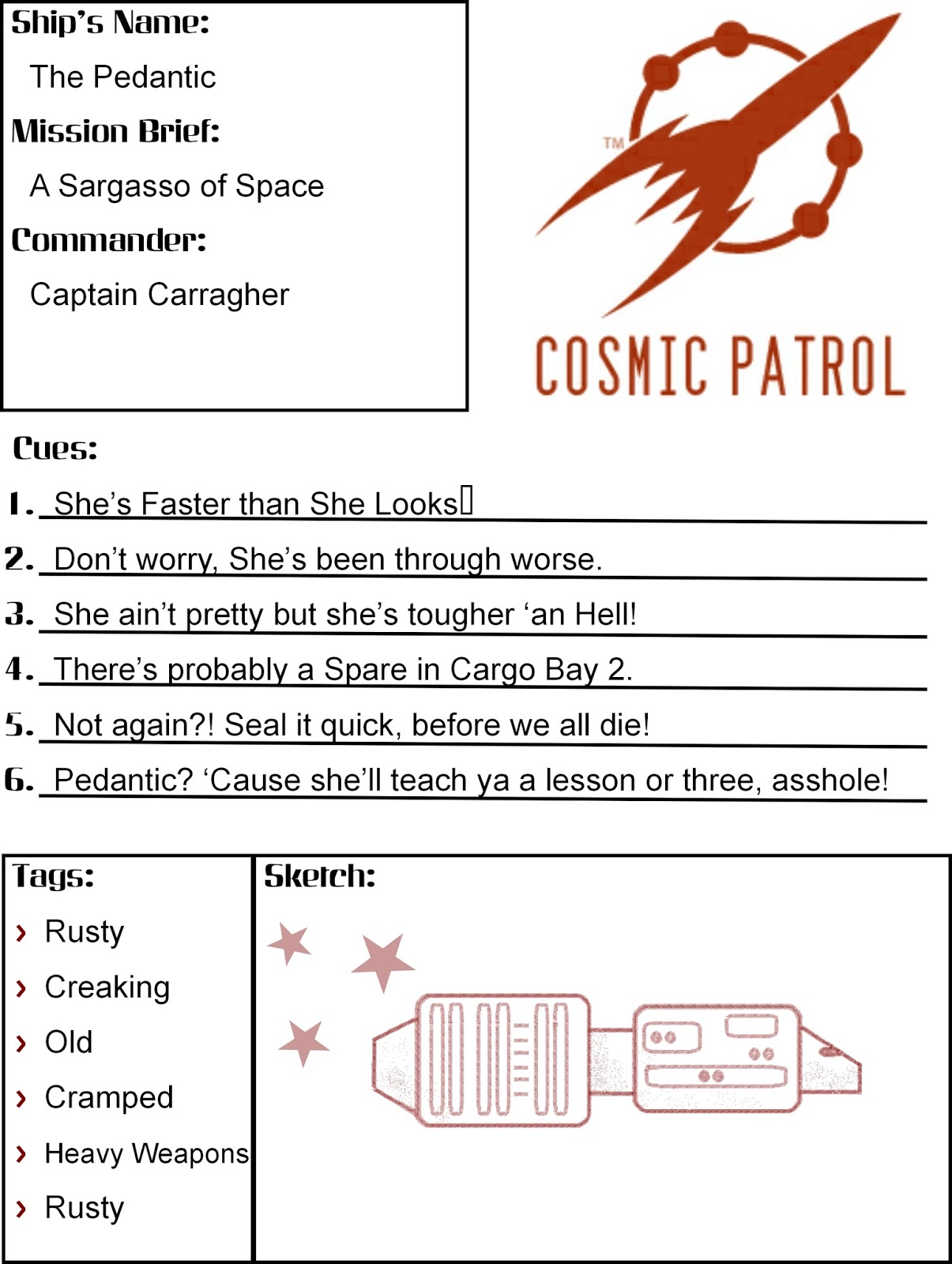 Above are the blank form and a filled-in example. (Click to Activate) They follow the same general ideas of the Cosmic-P character dossiers. To those who haven't yet played Cosmic Patrol or *gasp* don't want to, these would work just fine for any game. Replace the word Cues with Aspects and hey it's a FATE ship sheet. Magic.

Legal shiz - I do hereby release these creations (the ship-sheets)  into the wild and furthermore release them to you all to do with as you please. Simply attribute the original design to me, Edward Lockhart, and Violent Media with the exception of that rad logo; that's all Catalyst Game Labs. Speaking of that: This license is what makes me think I can do this at all.

That's all for this edition of Violent Media in Spaaaaaaaaaaace! Questions, Comments, Etc? Leave a message after the beep.

* To be fair, I haven't seen the newest Cosmic P releases. The surprising amount of work that went into these seemingly simple forms may have well been a complete waste of time.
Posted by Evey Lockhart at 11:07 AM

Miniature Based Combat Can Suck It!

I don't care for minis nor gridded combat. Even the Savage Worlds game I'm running has no grid, nor figures, nor any of those accoutrement. I've got two pretty simple reasons for this:

1) I don't like complexities.
Moving things about on a grid with all those special rules in the name of "precise, tactical realism" gets complicated and time consuming quickly. I want combat to be quick and mean. Besides, I'd rather spend more time role playing. Guess how I feel about 3.X DnD...

2) I try to never describe in-game events through anything other than the characters' perspective.
The bird's-eye-view of mini based combat obviously thwarts this purpose, and in my opinion does much damage to a player's immersion. Moving miniatures around on a grid, you are acting as and thinking as a Player. Describing how you duck the orc's vicious spear thrust and slap at his exposed knee with your axe, that's Character thinking, baby. That's the good stuff.

Concerning Large and/or Complex Battles
To be fair, I don't run complex nor large fights very often. My system makes such prospects deadly situations which are better off avoided. (I like this.) When things do go that direction, I sketch out a rough map of the situation for myself. On occasion, muddled descriptions wind up just confusing everybody. Giving the players a quick glance at the map is usually all it takes to right the situation. Afterwards, it's all back to relating the situation in front of them and nothing else.

That's my brief take on the matter.

Am I totally full of shit? Tell me how.
Posted by Evey Lockhart at 12:17 PM