I’ve recently taken quite an unexpected jolt and totally failed my system shock roll. My wife is unexpectedly - and despite our efforts to the contrary – pregnant.
I am by nature a planner so this news hit me like ton of upsetting bricks. Now, I don’t mean that I need flow chart to get through day to day tasks, and I never make a list before going grocery shopping. What I need to process anything is a good understanding of the abstract principles behind it and some reasonable amount of data from experience or research so that I can make the correct decisions.
I had no experience, minimal data, and no specific guiding principles. My brain was dead-locked until a few days ago. Creative enterprises had been pretty much out of the picture for the past couple of weeks.
Well I decided to give my brain a bit of a jumpstart with some inspiration from the good Gnome, Mr. Martin Ralya. (Go on and read it. I’ve got infinite time since this is a one way communiqué being read at your leisure. So really you’ve got to ask yourself if you’ve got the time. [You’re reading this nonsense so I’m guessing the answer is yes.])
I printed out a blank hex map to use as my die drop table and hand labeled it (‘cause I don’t like how Hexographer labels it). I quickly figured out why hex maps aren’t normally labeled like gridded maps. Each column is –of course– offset from the previous column, making labeling the rows problematic. (The reverse of that could be true but that’s not how I printed it so shut-up.) Anyway, I stubborned my way through that and it was time to pick ye ole dice and what they represent.
I wanted to make a map for sort of a scarcely-tamed and quite rough wilderness area on the outskirts of a more civilized kingdom in a low-fantasy setting. Just like Martin suggested, I decided a higher number rolled means a greater intensity of whatever it is.
5d6 – Mountains (If # is 5 then 1 Adjacent square is Mountains, 6 then 2 Adjacent Squares are Mountains)
6d6 – Hills
6d6 – Forests
4d6 – Swamps/Bogs
1d3 – Fort (# is 10’s of Soldiers)
1d24 – Fort (# is Number of Soldiers)
3d5 – Farmland (Haphazardly spread Homesteads)
1d7 – City (# Approximate Population in 100’s)
1d12 – Market Town (# of services available)
1d16 – Goblin Hunting grounds (# is 10’s of Population)
1d10 – Giant Territory (# is members of Tribe +1 Chief and his Son)
1d14 – Ancient Ruins (# of Standing Ruins)
1d3 – Catacombs (# of Levels)
1d8 – Temple (# of Priests/Size of Temple)
Everything else is rocky scrubland to the North and grasslands to the South.

Cronnon and the Southern Marches

A1 – Catacombs of Caeldwyn – Very few know of its existence. Rumored to be filled with ancient loot. Land nearby is said to be blighted.  One Level.
B4 – Ruins – From the same Lost Civilization as the Catacombs. 9 Rooms of various Buildings are more or less intact but very unstable.
B7 – The Blasgraya, Goblin Tribe – Feral hunters and gatherers led by an animistic shaman. Northern settlers and new generations of farmers from New Hope are beginning to encroach on the tribal hunting grounds.
C1 – The Sovereign City of Cronnon – Formerly attached to a much larger Kingdom to the North, Cronnon lost touch with the rest of the world 6 generations ago. The City is ruled by a Senate of various craft Guilds. Cronnon’s strong, stone walls could easily house 600+ but the population has dwindled to just over 100 souls living permanently in the town proper. More and more the young of the city head out to homestead at the settlements to the East and South. There are almost no craftsmen outside of Cronnon.
C2 – Old Fort – Now manned by a skeleton crew of 10 soldiers, the Old Fort once spread the might of Cronnon through the countryside. Many shepherds still rely on the Fort’s meager protection as they graze their herds through the surrounding hills. Rumor says it was built on a much older structure.
C7 – The New Hope Settlements – 5 firmly established homesteads and dozens of other families with only one or two hard-won acres. Almost no craftsmen are to be found amongst the settlers. Tools, cutlery, crockery, and all other crafted goods are hard to come by and fetch a high price. 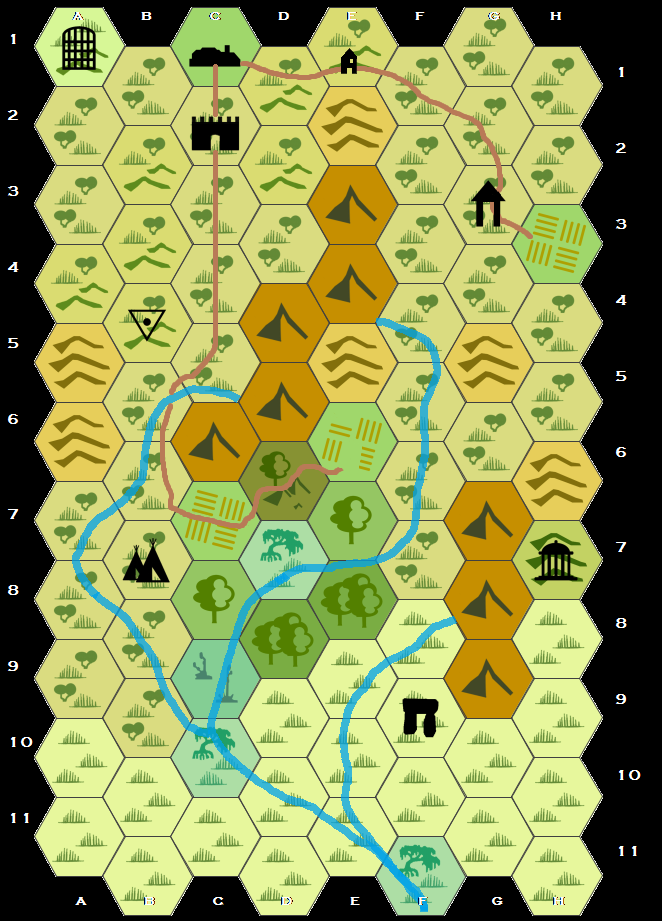 C9 – Fungal Blighted Swamp - A black ash-like fungus has killed most of the trees and other plant life.
D7 – Glyndon Swamp - Named after the man who failed to tame it, this fetid, still-water swamp is said to be the home of restless, fey spirits.
E1 – Gowenfries – Market Town – Facilitates trade between the artisans of Cronnon & the farmers of the Brendanauch Settlements. Services available: Inn, Tavern/Brewer, Seamstress, Ropemaker, Cooper, Cobbler/Leatherworker, and sometimes a Wandering Tinker. Gowenfries is governed by a Sheriff appointed from the Cronnon Council.
E6 – Gods’ Tree Settlements – Only two generations old, Gods’ Tree has two established orchards growing apples and pears. There are  also a smattering of first generation families. Settlers found an abundance of wild fruit trees when they arrived and named their land after an ancient, incredibly large apple tree. The Scragdale family can even boast having an experienced blacksmith in their employ, though he often wants for supplies.
F9 – Clasbreeg Tribe of Giants – This tribe roams the plains looking for prey and fiercely defend their territory. The seven females range in height from 7’3” - 7’8” with long, lean limbs. The male Chieftain and his son are much stockier and stand at 8’1” and 8”3’ respectively. The females hunt and gather, while the two males share leadership duties.
G3 – Cronnon Watchtower – Built ostensibly to help protect Brendanauch, this watchtower is guarded at all times by no less than three of Cronnon’s best fighters.
H3 – Brendanauch Settlements – Nearly five generations old, this well established area boasts 5 sprawling, fertile farms. The original settling families now hire dozens of hands each spring and fall and keep large staffs year round. The settlement pays taxes to Cronnon in exchange for the right to trade in Gowenfries.
H7 – Temple of Shadow’s Eye - Formed during the Downfall of the Greater Kingdom, this small, self-sustaining temple has existed in secret for over a century. It’s dedicated monks pray to all the known Gods (Good, Evil, and Otherwise) to cure the Shadow of Isolation and bring back the Light of Civilization. 2 of the Seven Brethren are old and close to death. Soon the Order will have venture once more into the world to replace them.
That’s it for the Cronnon and the Southern Marches. I’ve left plenty of room for everyone to fill in the blanks as they see fit. The wonderful chaos of the all-mighty dice helped me create an odd, nuanced, and isolated dark ages micro-setting that otherwise would never have been.
I can just imagine all the fun one could have unleashing the Mythos, an Egalitarian Revolution, or a Savage Horde on this little backwater. I’m terribly pleased with the whole process and highly recommend it. Roll them Bones and see what happens.


Plus it was the perfect excuse to dick around with my weird Gamescience dice. How often do you have a reason to roll a d5?
Posted by Evey Lockhart at 1:48 AM