Recently, while reading about Rory's Story Cubes and their potential for NPC generation, I got inspired to create something else I'd only recently discovered,  a Die Drop Table.

I quite liked the idea of symbols being used to inspire personality and background. Symbols are powerful tools and keyed directly to the psyche. Just take a look at the works of Joseph Campbell or Carl Jung.

Plus, symbols carry a lot of variable meaning. For instance, a Cloak could represent someone hiding their identity or some other deception, complex espionage (think cloak and dagger), operatic criminality (black cloaked super-villain), or even utility (practical outerwear for the medieval man on the go). Story Cubes have this kind of wonderful, semiological potential in spades. I will definitely be buying them as soon as I can afford them. It's not often I get to combine my dice fetish with my education in literary criticism. Fun Stuff.

However, I did see one strong limitation to the Story Cubes; there was no immediate method of determining how strong the traits were. That's when the idea of a Symbol filled Dice Drop table struck me. The numbers on the dice could represent how powerfully each symbol presented itself. Each symbol would spark a defining trait for the NPC. The relative values of the rolls could portray how obvious the characteristic is to the PCs or how strong the drive is in the NPC.

To use the table, one just drops 3d6 on it. Wherever each die lands, use that symbol to inspire a personality trait, past event, item, or skill; the higher the number, the more important or obvious the particular trait. If a die should happen to land on the border between symbols, simply chose whichever symbol you prefer or interpret both symbols together. Should a die roll off of the table either ignore it or reroll.

Some Possible Interpretations for The Symbols 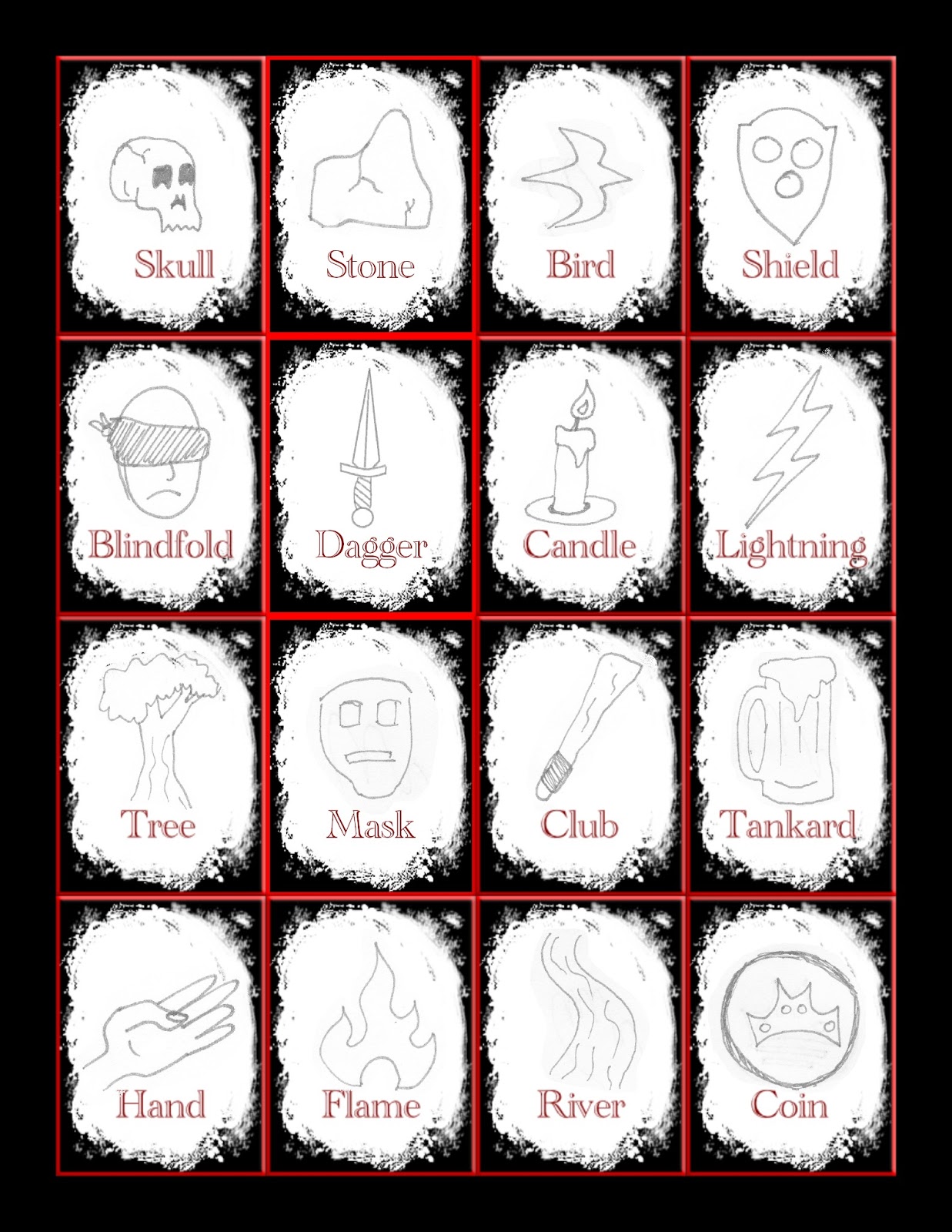 River - Directed or Cool. Examples: Driven Toward a Goal, Level Headed, or Slow to Anger but Brutal in  Rage.

Say you need to flesh out a random city guardsman on the fly in a typical fantasy setting. You drop the dice and they turn up 2 on Flame, 4 on Tankard, 6 on Candle. You've got yourself a passionate fellow dedicated to his job. He's a friendly sort and genuinely cares about the people he protects. A devout follower of the local religion, he avoids many of the vices of his fellows and follows the law to the letter.

How about a local street tough in a modern city? After chasing one off the table twice, the dice turn up 2 on Club, 1 on Dagger, and 5 on Stone. She's gruff and violent but not as nasty as she could be. She quietly holds dirt on a few low level scumbags and can therefore command some favors from them. More than anything though, she just doesn't let go. When she's on the job or decides she wants something, she simply will not let anything stop her.

Here is a link to the Illustrated PDF of my Dice Drop Table.

For those with more drawing skill than I, here is a link to a blank PDF of the the Dice Drop Table.

Enjoy! and any Feedback would be greatly appreciated. I really think there are a great many uses for these types of tables. Should you make one, do please drop me a line.
Posted by Evey Lockhart at 12:13 AM